Bill Cunningham was a quintessential New Yorker, beloved by many. He is most widely known for his fashion and society photographs shot for the “On the Street” column in the New York Times, where he worked for nearly 40 years as a photographer and journalist. As a testament to his popularity and public admiration, shortly after his death in 2016, 6,000 New Yorkers signed a petition to have his favorite corner, 57th Street and Fifth Avenue, named in his honor. The site where he could be spotted on his bicycle shooting street fashion more often than not was temporarily christened with a green street sign, “Bill Cunningham Corner.” 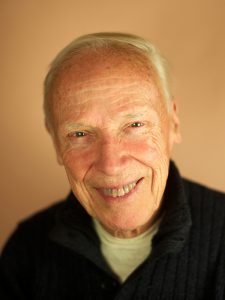 Bill Cunningham (1929-2016) was one of New York’s most beloved public figures. A man of unquenchable creativity with a tirelessly inquisitive mind, he was equally passionate about politics and art, and maintained an unstinting devotion to his close friends.

Cunningham considered himself to be more of a record keeper of historical knowledge than an arbiter style, according to text at the New-York Historical Society’s exhibition mounted in his honor, Celebrating Bill Cunningham. His honorary street sign, as well as numerous other objects, personal correspondence, ephemera, and photographs are on view, offering insight into a rich creative life and treasured friendships. 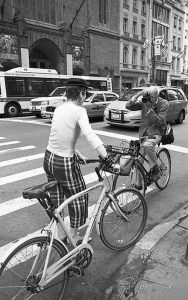 New Yorkers could reliably spot Bill Cunningham photographing street fashion, on foot and on his bicycle, at the corner of Fifth Avenue and Fifty-Seventh Street. After his death, both his personal acquaintances and the many avid readers of his column felt his loss equally.

Bill Cunningham moved to New York City in 1948 and soon branched out on his own as a milliner, making hats and fascinators under the name William J. Hats, photos and scrapbooks that detail his style, inspirations and influences during this period are on view, alongside promotional items like business cards and the sign outside his late 1950s atelier on the Upper East Side. Hats went out of style by 1961 and Cunningham moved into a career as a fashion writer for Women’s Wear Daily in 1964. 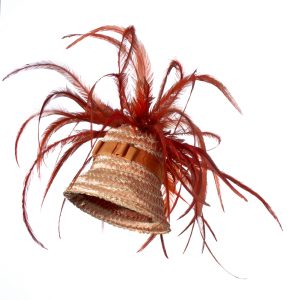 Cunningham began his long career in New York as a milliner. His stylish “William J.” hats mingled innovative forms with naturalistic ornament. Elegant and whimsical, his hats were favored by upscale clients who enjoyed wearing fashionable works of art. Cunningham’s beach hats were, in his own words, “a bit outrageous.” Woven raffia show-stoppers topped with cascading sprays of feathers or chiffon, the hats sported deep crowns created to fit comfortably over the high-piled bouffant hairstyles of the early 1960s.

During his first decade as a journalist, Cunningham covered fashion for the Chicago Tribune, Los Angeles Times, San Francisco Chronicle, Vogue and Harper’s Bizarre. After expressing a desire to move beyond writing to photographing fashion shows and streets, photographer David Montgomery gave Cunningham a camera. One of his first photographic projects, Facades (begun in 1968 and lasting 8 years) featured friends and models in period costumes in front of New York’s architectural gems; situating historic buildings and neighborhoods as backdrops for his muses. 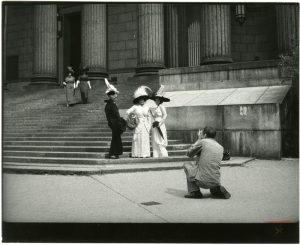 Much of the material on view in the exhibition reveals a man full of joy and life; someone with a deep appreciation for people despite his upbringing in a stern Catholic family in Boston. A few of Cunningham’s handmade Valentine cards, which were an annual treat for friends, are included in the exhibition revealing his personal touch. An original short film by Josef Astor, A Visit with Bill Cunningham, is also included, allowing visitors to the exhibition to hear Cunningham speak in his own words. For those who want more, Cunningham left behind a surprise memoir that will be released by Penguin Random House in September 2018, Fashion Climbing: A Memoir with Photographs.

Cunningham’s career as a photojournalist began in 1966. While in London covering fashion for the Chicago Tribune, he met the distinguished photographer, David Montgomery. Cunningham told the photographer about his interest in photographing the styles he observed at fashion shows. Several months later, Montgomery gave him this camera to record his observations.

Celebrating Bill Cunningham is on view at the New-York Historical Society through September 9, 2018.