As more artists choose a socially engaged art practice involving collaboration, the changemaking power of art and design has become increasingly evident. In the case of artist Nicolas Holiber’s latest public art project, Birds on Broadway, a network of partnerships have joined forces to raise awareness and action around climate change—more specifically, on endangered bird species that are either native to or pass through New York City on their migration routes.

Holiber’s project, also known as the Audubon Sculpture Project, is an outgrowth of the Gitler &_____ art gallery project, The Audubon Mural Project. Both projects illuminate a September 2014 National Audubon Society Birds & Climate Change Report, which warns of a precarious future for 314 climate threatened or endangered birds, over 50% of North America’s bird species. Birds on Broadway, slated to launch in April 2019, will feature large-scale sculptures of 12 of the 145 species of birds that live in or pass through NYC.

Each bird will be installed from 64th to 166th Streets along Broadway, in most cases, near subway stations, as part of the Broadway Mall Association’s 12th sculpture show in the area. At 120th Street and Broadway, Holiber says passersby will encounter “one of the most playful sculptures that we have,” the Hairy Woodpecker. A generally uncommon species that prefers to live a sedentary life in forests, it is thought to be at risk due to forest fragmentation, and increasingly faces the challenge of finding new habitats.

Since April 2018, Holiber has been working with one assistant in a 10,000 square foot warehouse in Brooklyn. With space to store supplies, build and house the sculptures until their debut, Holiber says, “This is what I’m doing for this year, and nothing else.” So far, he has completed phase one of the building process, structures for 9 of the 12 birds. Phase two, which he anticipates will begin in September, will involve more stylized and representational work. 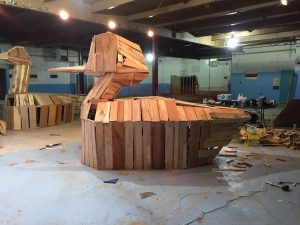 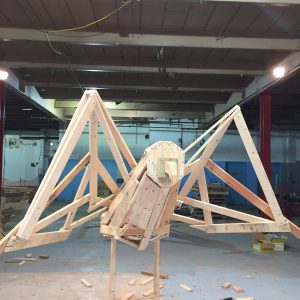 Holiber’s hand-crafted large-scale wood sculptures are based on illustrations from John James Audubon’s masterpiece, Birds of America, published in the first half of the 19th century. The original edition of the book, of which few remain, contained 435 hand-colored, life-sizeprints made fromengraved plates, measuring around 39 by 26 inches.

Most of Holiber’s supplies have been donated by local businesses, including unique pieces like bedposts, molding and floorboards, part of a large stash of reclaimed wood that will be used to make the birds. The splitting of pieces of lumber with a hammer and chisel will create an organic feel to the layering or “feathering” of wood on the surface area of each bird, while colored paints will help individualize each species. However, the works will not receive weatherproofing, allowing the sculptures to change as a direct result of climate conditions. 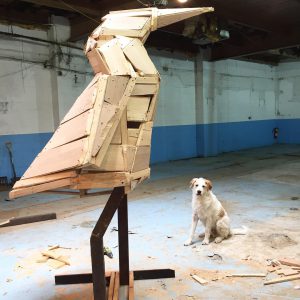 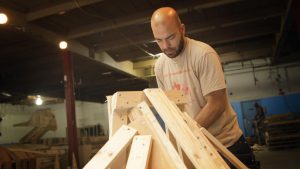 The project has been made possible through a highly successful Kickstarter campaign and a coalition of presenting partners including New York City Audubon, Broadway Mall Association, New York City Parks Department, and Gitler &_____ Gallery.Holiber says learning about New York City’s birding community and their enthusiasm has been eye-opening and inspiring as well. He notes, “I had no idea that some of these birds come through New York City. There are Snowy Owls on Governor’s Island!”—albeit, probably a once-in-a-decade sighting for this rare wintertime bird.

Nicolas Holiber: Birds On Broadway | Audubon Sculpture Project will be on view from April 2019 through December 2019. 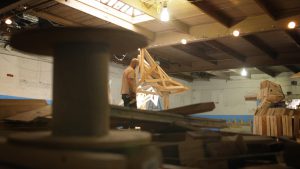 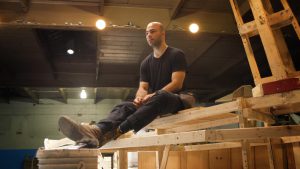