While real estate developers, government officials, and global financial players jockey for position in the housing market, everyday people are increasingly caught in the crossfire. As an anecdote to this pressure, which often manifests on the local level as “gentrification,” a team of activists and artists formed Community Heroes, a community-based public art project that celebrates everyday heroes in New York City, neighborhood by neighborhood. 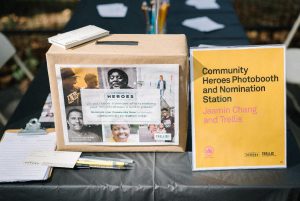 Hero nominations are collected both online and in person at events and meetings around the neighborhoods such as in parks, libraries and community centers.

Founded in 2016 and designed to bring neighbors together, the project uses photography, storytelling and community engagement as building blocks to strengthen relationships among old and new residents of local communities. In the past, Community Heroeshas partnered with Peace Fest, an annual Memorial Day event in Fort Greene Park, and the Old Timer’s Day celebration in Gowanus, where they created photo and text-based installations of large-scale banners that celebrate local residents. 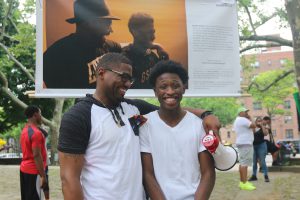 Shawn Doyle poses with D’Angelo Rembert, whom he has mentored through youth programs at the Ingersoll Cornerstone Community Center in Fort Greene.

For the Community Heroes2018 portrait exhibition, the project is focused on the neighborhoods of Fort Greene, Clinton Hill and Farragut; three sections of Brooklyn that, according to old timers, comprised one larger neighborhood back in the day. Twenty portraits will be on display, split between Fort Greene Park and Commodore Barry Park, with additional portraits being added to the exhibition, which runs into 2019. Featured heroes are selected through a nomination process that involves outreach to and input from community members. The results often uncover stories of individuals who are deeply cherished by long-standing members of a community, but unknown to newer residents. 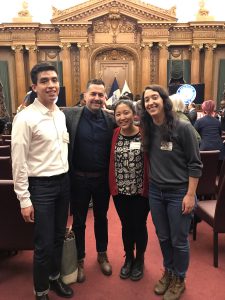 Community Heroesco-founders Jasmin Chang, Zac Martin and Darrell Cheng, attended dozens of community gatherings, including meetings at: Community Board 2, the Walt Whitman and Clinton Hill Public Libraries, the GrowNYC Fort Greene Greenmarket, the Fulton Street Business Improvement District, and local tenant associations, including those at the NYCHA developments - Atlantic Terminal Houses, the Farragut Houses, the Ingersoll Houses, and the Whitman Houses. Once heroes are identified, the Community Heroes staff pairs them with a local photographer for a portrait session, and the creative process unfolds from there. 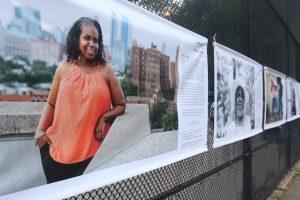 There is no question that word-of-mouth and offline outreach are central elements to Community Heroes’ intergenerational, economically diverse and culturally aware approach. To that end, visitors to the project’s installations in New York City parks will undoubtedly encounter fascinating stories of New York City neighborhoods and their human advocates. In the case of Fort Greene/Clinton Hill/Farrugut community heroes, the historic African-American social fabric of the area is a highlight. One story features Olivette Thompson, a visionary who created continuity for Fort Greene residents forced to move from public housing due to their new-found middle-income status; she helped develop the first housing cooperative of its kind in the United States, the Navy Yard Cooperative Apartments, so that they could remain in the area.

Community Heroes kicked off its 2018 portrait exhibition on August 18, 2018 in Brooklyn, New York at Commodore Barry Park and Fort Greene Park. The exhibition opened in tandem with the 11th year celebration of Old Timers Day, a reunion in Commodore Barry Park that is free and open to the public. On October 6, 2018, Community Heroes will also host a potluck picnic in Fort Greene Park to celebrate the heroes’ portraits, the organizers, and their collaborators.