In this day and age, it can be costly to take a gorgeous view of Earth’s natural environs for granted. It could be gone tomorrow; replaced by a building, a new exurb development, or another earth-shattering search for natural resources. However, while eco-activist-innovators are researching and planning the future of cities and urban development, New York University’s Grey Art Gallery has mounted a curious exhibition, Landscapes after Ruskin: Redefining the Sublime. 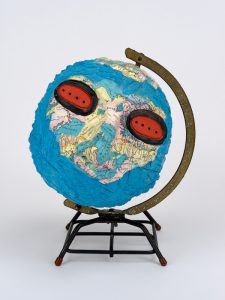 An eclectic selection of artworks including photographs, video, and sculpture explores the idea of “the landscape” in a myriad of non-traditional nuanced interpretations. The works go far beyond visions of vast, grandiose beauty in an endless unfurling terrain. With mostly culled from the 21st century, and a large portion from the late 20th century, the closest thing to a traditional landscape painting in the exhibition is Gustave Courbet’s, La vague (The Wave); an oil on canvas painted circa 1869 that is certainly not sublime. The terror of a large ocean wave under grim skies offers a counterpoint to more idealized views of nature in our collective cultural memory. 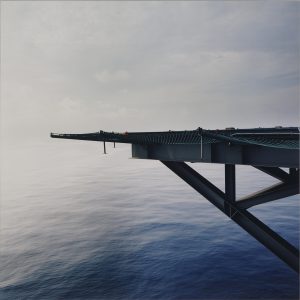 A group of Raymond Pettibon’s wave drawings (2004), created with ink and watercolor on paper, offers another interpretation of the same subject matter. Installed salon style in a corner, the works suggest the tumultuous nature of a shifting sea, albeit in a more playful blue color palette reminiscent of the hues of the surfer life. The amplified color you might find in commercial landscape photographs is generally absent in the exhibition, other than the vibrant orange, blue, green and pink found in Matthias Weischer’s Bulgarisches Haus (2001). The painting's palette may remind viewers of David Hockney’s use of color in works that capture Los Angeles leisure life. However, its depiction of a five-story apartment building on a canvas that reveals the artist’s use of outlines and other unfinished markings and drips, suggests the imperfection evident in most residential landscapes.

Experimental works can be found in the exhibition in a variety of formats. Christopher Draeger’s Pan AM 103(2003) is based on a press image of the 1988 plane crash in Scotland resulting from a terrorist bomb. The final piece’s material substrate is acrylic paintjet on a jigsaw puzzle. The work of Spencer Finch uses light as both material and subject matter. Titled, The River That Flows Both Ways (Hudson River, June 12, 2008; Early Morning Effect 9:20 am, Late Morning Effect 11:29 am, Noon Effect 12:10 pm, Afternoon Effect 3:54 pm, Evening Effect 7:08 pm), the series of five sheets uses the water of New York’s Hudson River as a reflective surface to create photographs described as “handmade overbeaten abaca, double couched, with trapped bubbles.” For the series, Finch documented the river’s surface once a minute as he drifted on a 700-minute journey in a tugboat down the West Side of Manhattan.

Landscapes after Ruskin: Redefining the Sublime at NYU’s Grey Art Gallery is on view through July 6, 2018.