While photography is now widely accepted as art, in the 20th century, there was a tenuous debate around the equation of the form with the legendary status of painting and sculpture. However, the emergence of conceptual photography in the 1970s and its shift from an appreciation of craft and authorship to one that prioritized the act captured within an image marked the official acceptance of the artistic importance of photography. 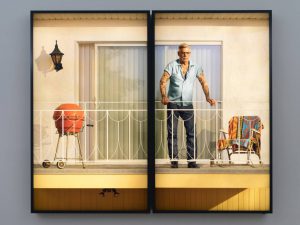 The collective works of Rodney Graham engage this conversation on one level, while simultaneously engaging with fictional characters. His subjects act in familiar scenes selected from what could be characterized as an archive of public visual culture. The aging rockabilly fan, the uptown art dealer, the philosopher, and the existential-sentimental mountain man populate a series of lightbox works that explore cultural archetypes. 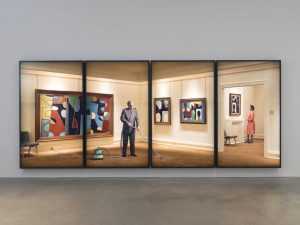 Influenced by art, Hollywood, music, history and their implications in the social world, Graham has chosen masculine tropes that he himself can embody. There is a barely distinguishable touch of humor in the environmental self-portraits speaking to both the possibilities of individuality and agreed upon, generalized conceptions of manhood. 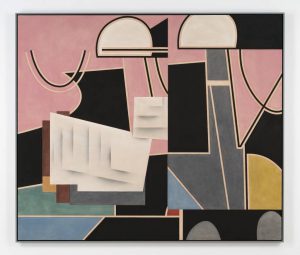 In the work, Vacuuming The Gallery, 1949, Graham performs a scene inspired by a photograph shot in 1949 of New York gallerist Samuel Kootz. The work unfolds across nearly an entire gallery wall and is spread across four light boxes. In the original photograph, Kootz smokes a pipe as he vacuums his own gallery during a Picasso exhibition. In Graham’s performance of the image, Picasso’s artwork is replaced with his own Alexander Rodchenko-inspired abstract paintings, and a woman lingers on the right side of the work, looking at the artwork. The paintings that are staged in the lightbox work are also on view in the gallery space, creating a juxtaposition between the technologies of early 20th-century painting and the conventionality of the lightbox. 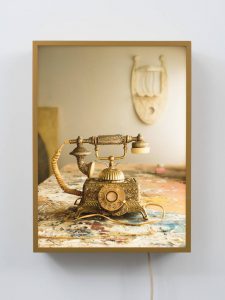 A small piece tucked in the back corner of the gallery—another lightbox work—features an ornate gold antique telephone, full of elegant detail. The phone sits in the foreground atop a paint-splattered tabletop that fades into the background. Delicate blues, pinks, yellows and white abstractly fall into a shallow depth of field, once again bringing up an ongoing conversation between the photograph as art and its forbearers, painting and sculpture.

Overall, there is indeed a playfulness in Graham’s body of work that emerges upon further contemplation. However, it sits squarely alongside an examination of male personhood and reverence for art history.