Eric lives and works in Asheville, North Carolina as a photography professor at the University of North Carolina Asheville. He worked for a number of years as an editorial photographer in New York City before moving to India, where he became a founding faculty member at the first photography school on the subcontinent. Eric earned his MFA from the University of Texas at Austin and has exhibited his work throughout the U.S. and internationally.

How did you hear about Capture the Moment?
When I was working in New York City in the late ‘90s, I used to bring my chrome film to Duggal, so I was already familiar with the company when I saw Capture the Moment.  So with this award, my relationship with Duggal has really come full circle, and I can’t thank them enough for supporting my work.  I would also like to thank the jurors as I know it take a lot of time to go through so many images and arrive at a handful of finalist.

Tell us the story behind your winning image, “Lifeguard.”
I had the good fortune to spend a month in Puri, India, along the Bay of Bengal. There is a small fishing village just on the outskirts of Puri where I often walked the beach talking with locals. Every morning, fishermen row boats carrying about 10 men through large waves to go out fishing and return just before dusk to sell their catch on the beach. This man, the lifeguard, is there to help pull men from the crashing surf as boats often capsize as they push through the waves. When I asked him if I could photograph him, he replied with an enthusiastic smile. Eventually, he grew bored of my interest in him, and that allowed me to get this image of him: simultaneously unassuming and regal.

What’s running through your mind as you think back to the moment you took the photograph?
First, this was 27 years ago, and that in itself is pretty hard to believe. While not the very beginning of my career, it was certainly a seminal moment in terms of my understanding of photography, and specifically portraiture. Now, as a professor of photography, I spend most of my days articulating how the medium functions within culture technically, aesthetically, and conceptually, so this image really takes me back. In those days, I was essentially a street photographer, responding to what I came upon, and seeking to understand how to collaborate with the world to distill an image that might tell a story or ask a question. 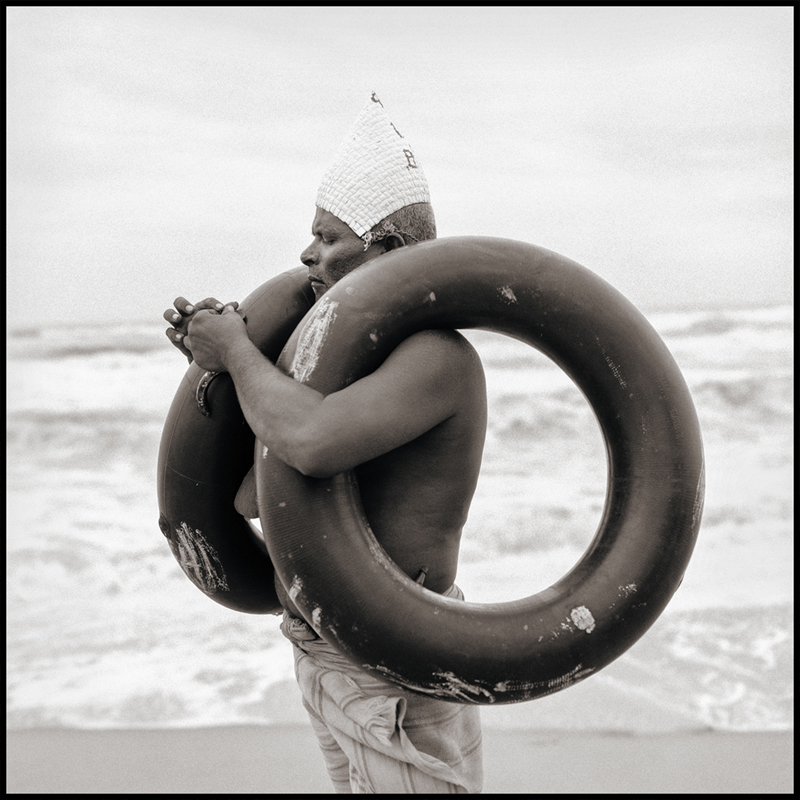 I made this image on black and white film using an old medium format Hasselblad, and then processed it in large dip and dunk tanks. A lot has changed since then, maybe everything. I feel fortunate to be a photographer today as the medium continues to reinvent itself and digital workflows continue to evolve. Since its inception, photography has been driven by technological advances, and now I think of photographing in a way I couldn’t have imagined 10 or 15 years ago because of these advances. I have really shifted from making photographs to collecting raw material, a latent image if you will.

What do you think makes this image powerful?
That’s tough. I think to some degree it is the simplicity and directness of  the composition. Perhaps it is that he wears his work in the form of inner tubes with indifference. It could also be his extraordinary hat, which is designed to help him break through the waves and identifies him as lifeguard. He actually gave me his hat as we parted ways. But actually, I think what is most powerful to me is that he is a man alone against the sea.

What has your career been like as a photographer?
Amazing! I have gotten to travel the world, worked professionally, and now I get to share what I have learned with young people who are just getting started. I have never stopped learning and continue to find new ways to think about photography.

This image came out of my first trip to India, which was a study abroad crash course in international travel during college. Some formative experiences I had in India led me to a project entitled, Outside the Garden, which I worked on for about a decade examining our relationship to domesticated animals. Suffice it to say, I have been a vegetarian ever since that first trip almost thirty years ago.

After finishing my undergraduate degree in California, I moved to New York where I worked as an editorial photographer for five years, and from there I moved to India for a year to help start a photography school. During that time, I made it back to Puri where I saw many of the same villagers, including Jagu who I had become especially close to 6 years ago. This village was hit hard by the 2004 tsunami, and I often wonder what became of Jagu and the rest of the village.
Images: Dairy Farm, large format negative, 2004.
Mineral Wealth, large format negative, 2005

After returning from India, I moved I moved to Texas to pursue an MFA in Photography at UT Austin. Grad school was a great experience during which I produced, Massification of the Sublime, a series exploring how human problem solving and creativity manifest themselves in the landscape. Solving one problem often results in another; take the levies in New Orleans as an example.

About the last thing that happened to me in grad school was also the best. In 2005, I went to a conference for photographic educators in Portland, Oregon, and that is where I met Carrie Hall, now known as Carrie Tomberlin. She was finishing up her MFA in photography at Clemson, and somehow I talked her into moving to Seattle with me.

Since that time, she and I have had many photographic adventures together, and in 2010, we moved to the Blue Ridge Mountains where we head the photography program at UNC Asheville.
What are you working on now?
For a number of years, Carrie and I have been working on our first full collaboration: Sea Level Rise: Visualizing Climate Change, which looks at community-based adaptions to climate change in Bangladesh. In an effort to better illustrate both the challenges and mitigation strategies implemented by the Bangladeshi, we have developed a new workflow that may just be in the realm of post photography.

This new paradigm allows us to collect a range of time and collapse it into panoramic space, which we later distill into a singular allegorical narrative that has the potential to express a more complex story than a singular photographic image. Time distillations parallel environmental issues in that it is the accumulation of time that reveals the gravity of the situation more clearly than any individual moment.

As I said earlier, photography has always been driven by technology, and our time distillations are a byproduct of this. Still, for me, some things have remained constant through all the change: the need to ask questions and communicate ideas; an interest in time; the decisive moment; narrative; and finally, an interest in walking a line between fact and fiction, between art and the document. In one sense, everything I photograph is real and true, and in another I am simply telling stories, reshaping context by rearranging time and space. Ultimately, I want m photographs to serve as a catalyst to reflect on who we are and where we are going.
Flooded Brick Factory, Ashulia, time distillation, 2014 (From Sea Level Rise: Visualizing Climate Change series)

What advice would you give to emerging photographers? Don’t let digital photography create complacency while you’re photographing. It’s tempting to just shoot away and assume you’re going to get “the one,” at some point, but often that’s not the case. Slow down, take your time, and embrace the depth that photography creates in the way you experience the world.

I would also say establishing a good working relationship with your lab is essential, from student to professional, most of us rely on the folks working in our lab to make our work look as good as it can.  This is why I am so excited to learn about the Vibrachrome process and many thanks to Duggal for introducing me to it!

Congratulations, Eric, and thank you to all the photographers who submitted their images for our Capture the Moment 2021 Contest. As the grand prize winner, Eric will receive a $1,000 USD cash prize, a 20"x30" Vibrachrome™ metal print of his winning image, and the headliner spot in our Winners Exhibition to be produced and framed by Duggal.

Check out Eric's winning image and the other Capture the Moment Finalists here.