We are honored to announce Michael Duggal, CEO of Duggal Visual Solutions, has been named the 2021 recipient of the Franklin Award by the Printing Industries Alliance.

The Franklin Award is the highest honor given to an individual in the graphic communications community, presented to leading figures in government, business, journalism, and communications for their outstanding achievements and contributions to American society. The award is named after Benjamin Franklin, a printer by trade, with past recipients including US Presidents Harry S. Truman and Dwight D. Eisenhower, former Mayor of NYC Michael Bloomberg, Publisher Malcolm Forbes, and Television Anchor Walter Cronkite.

Founded in 1961 by his late father Baldev Duggal as a premier New York photo lab, Michael Duggal propelled Duggal Visual Solutions into one of the largest imaging service providers in the North America. Today the company has nine bi-coastal facilities, with its headquarters in Brooklyn, NY. Duggal provides premium visual solutions for leading retailers, prominent museums, professional sports and blue chip corporations, including over half the Interbrand Top 100, Best Global Brands.

Under his direction, Duggal Visual Solutions is the first to acquire the first HP Indigo 12000 B-2 digital press in the United States and, most recently, the first company in the world to install the HD LANDA S10. Both join a technologically advanced stable of 27 wide-format presses and state-of-the-art finishing and fabrication equipment.

Michael Duggal has received additional recognition this past year for his notable work in the printing industry and greater community. He was named Innovator of the Year in 2020 by Printing Impressions Magazine and, under his direction, Duggal was named one of the Top 5 Companies helping fight COVID along with Ford, Walmart, Amazon, and 3M in September 2020. 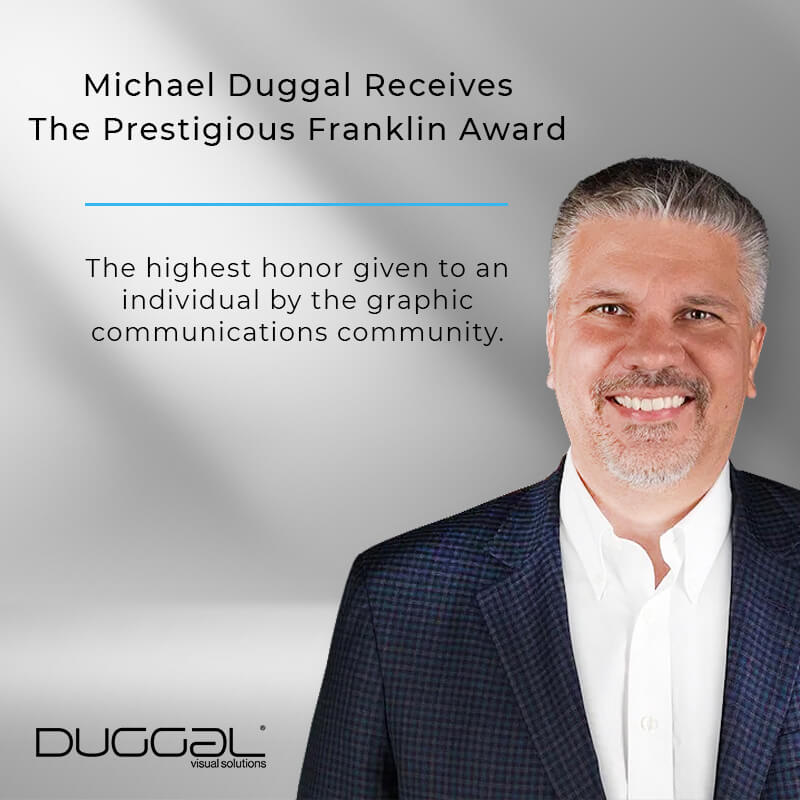 Michael Duggal and the team at Duggal Visual Solutions were quick to address the serious challenges posed by COVID-19. The company was authorized to stay open during the pandemic as an essential manufacturer of Personal Protective Equipment (PPE) by the New York State Governor’s office. Over 3 million protective face shields, medical garments, partitions, and intubation units were produced for healthcare workers and first responders.