Stunning and poetic images of the earth’s landscape are ever-present in the work of Kazuyoshi Nomachi. A signature blending of land and sky relentlessly reveals the surface of the earth in conversation with a vast universe. At times, the work also includes the human figure and communities of people, though always with attention to scale, encouraging recognition of the awe-inspiring truth of life itself.

Nomachi, one of Japan’s premier photojournalists, was born in 1946. He launched his career and found his calling in the early ‘70s through a photographic journey that took him to the Sahara Desert. Subsequent in-depth photojournalistic coverage of the Nile River region, Ethiopia, and the Great Rift Valley, among other places on the continent of Africa, cemented his photographic interest in the lifestyles and faith of people living in challenging climates. 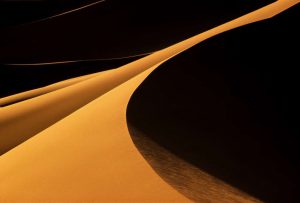 However, beauty as a driving force in Nomachi’s vision as a photographer is also unmistakable. The undulating dunes of the desert sensually rendered with the help of light and shadow or the cascading shades of twilight are gloriously invoked in his images. The vibrancy of their impact is an inescapable reminder of the daily exchange between humans and the environment that is lost in city life. 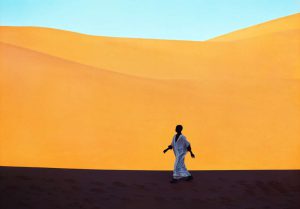 In the photograph, Kerzaz, Algeria (1972), a lone figure in a white tunic strolls in shadow across the bottom third of the horizontal image frame. A portion of sunlit desert fills the middle third and a sweet baby blue sky with a touch of turquoise sits quietly across the top. The gait of Nomachi’s subject suggests an ease, comfort and awareness of the ebb and flow of nature’s sensibilities in Kerzaz. The simplicity of the image is made powerful through an expert’s use of formal qualities: composition, light and shadow, density, scale and contrast. 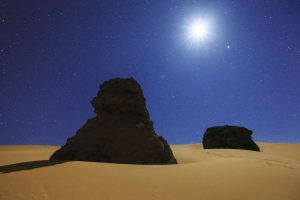 Nomachi has applied what could be described as a spiritual gaze to several regions of the world. His work spans extensive explorations of high altitude living in Tibet and its relationship to Buddhism; the role of the sacred Ganges River and its ties to Hinduism; several years in Saudi Arabia and the opportunity to photograph the largest pilgrimage in the world of Muslims to Mecca; and, time in the Andes mountains of Peru and Bolivia, where traditional Inca civilization and Catholicism have intertwined over centuries. Fortunately, much of his work has been preserved in photo books, such as Sahara, Tibet, Egypt, A Photographer’s Pilgrimage, and Bless Ethiopia, among others.

Kazuyoshi Nomachi is on view at Anastasia Photo until April 30, 2019.