In Nick Brandt’s latest photographic series, This Empty World, a dystopic fictionalized take on the relationship between human beings and the natural world is on view. Committed to a photographic practice that confronts environmental issues since the 1990s, Brandt has dedicated several collections of work to the landscape and fauna of East Africa, most notably his trilogy: On This Earth(2000-04), A Shadow Falls (2005-08), and Across the Ravaged Land(2010-12).

Brandt’s past work was shot in black and white, utilizing all the drama and poetry of a classic style of photography. However, in his current body of work, color photography is used to amplify the urgency of today’s environmental crisis. Brandt also uses the harshness of artificial light to create a stark emotional sensibility in the photographs, which were all shot at night. 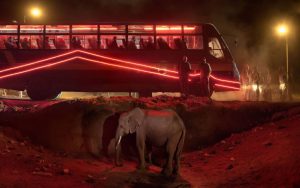 Created on Maasai land in Kenya, the images are essentially constructed. Brandt’s final pieces involve combining two photographs shot in the exact same location, but taken weeks apart. One image captures an animal—lion, giraffe, elephant—in its natural habitat. The other image features an elaborately staged environment, populated by local community members. Theatrical performative moments paint a picture of the disconnect between man and animal, within scenes that speak to the development of industry. A gas station lit by fluorescent lights features a lion emerging from the bottom of the frame, prowling up a dirt incline. The top half of the image includes men sitting at a small table, by a truck and standing underneath the station’s awning. The bifurcation of the photograph across the middle blatantly echoes the disregard for the earth and negative aspects that come from development—particularly overpopulation and urban expansion. 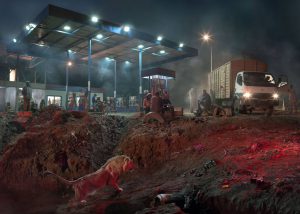 Brandt’s dismal, barren landscapes, void of any natural illumination from the moon or stars, echo the sense of desolation and destruction often found in the genre of science fiction. However, the photographs feel very of the moment. The props that stand in as representations of industry, and the absence of any sense of a lush green landscape are easy to relate to, albeit with a sense of unease. An eerie juxtaposition of the surreal and the real is achieved in the work. 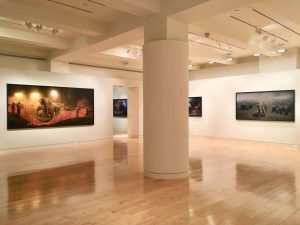 Although Brandt’s images do not offer any solutions to environmental issues, his work through the Big Life Foundation, which he founded in 2010, contributes to the conservation of the Amboseli-Tsavo-Kilimanjaro ecosystem in East Africa.

Nick Brandt: This Empty World is on view at Edwynn Houk Gallery through April 20, 2019.