Pencils of Promise (PoP) brought the world a large step closer to the organization’s mission of education for all with the 2018 PoP Gala, attracting “nearly 700 culture-shapers, change-drivers, and luminaries who collectively raised $3 million for global education.” 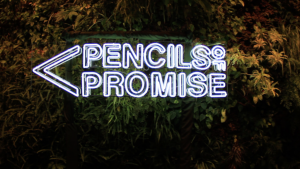 Celebrities including Lil’ Jon, Scooter Braun, Doctor Woo, and Christina Tosi were on hand for the fundraising gala, which was hosted at the Duggal Greenhouse and celebrated PoP’s 10th anniversary. The event also brought a special performance by Tori Kelly and an exclusive after party.

"It's very special. I walked in the room and was surprised by certain people that have flown in from around the world to be here for a night,” Adam Braun, founder of PoP and younger brother to Scooter Braun, told AOL. “It just means the world that a small-seeming idea can become something so much bigger for so many people and that 10 years later a night like this can happen.”

PoP builds schools and develops programs worldwide to bring educational opportunities to children in developing countries such as Ghana, Guatemala, Nicaragua, and Laos.

"We have a tremendous amount of children around the world who don't have access to even the most basic education,” said Braun. “I think it's every person's responsibility to make an impact whether it's large or small and partake in the lives of children. That's what we've set out to do here and now 10 years later we've been fortunate to have a tremendous impact—but we still have the ambition to do a lot more.”

The team at Duggal Visual Solutions and the Duggal Greenhouse would like to congratulate PoP on an extremely successful gala at the Greenhouse. We also thank them for giving us partnership shoutouts throughout the event materials and programming. It is an honor to support an organization that is bringing the power of education to so many children who might not otherwise have the opportunity to learn and dream.
<